The Fitzroy History Society 2021 Annual General Meeting – Awaiting a new date. It has been deferred due to COVID-19 restrictions.

Plan is to still have it at a later date  at the Fitzroy Town Hall Reading Room. Guest speaker will be Prof. Julie Cliff AO.

Meeting will be held at Fitzroy Town Hall in the “Reading Room”, start time is 7pm. 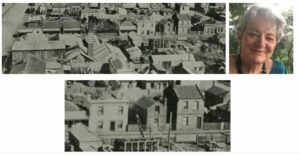 The Inner Circle Line - the Melbourne suburban rail line that disappeared.Carlton Community History Group have produced the above publication. The book tells the story of the development of Melbourne’s suburban rail lines, and in particular of the ill-conceived Inner Circle Line that ran through the inner northern suburbs (including Fitzroy North of course) from 1888 until its final closure in the 1970's. Due to the efforts of local residents and supporters, we now all enjoy the linear park that remains.Copies are available from Carlton Community History Group for $15 (plus $6 postage if applicable): www.cchg.asn.au/publications.htmlCopies are also available from the following:· Carlton Library, 667 Rathdowne St, North Carlton.· Kylie’s Slow Dough, 649 Rathdowne St, North Carlton.· Railway House, 20 Solly Ave, Princes Hill.· RHSV Bookshop, 239 a’Beckett St, Melbourne.(Note: Prices from these outlets may be more than $15, but no postage cost is involved). ... See MoreSee Less

Prahran Mechanics' Institute event.On Wednesday 22 September at 7.30 pm, PMI are running a 'virtual' slide night on Zoom. The topic will be images of Melbourne from the 1970s to the 1980s curated from several collections including Robert J. Moss the father of one of PMI's members with some stunning views of Melbourne from the air.The link to the event is shown below.The Zoom link is us06web.zoom.us/j/86850930818 ... See MoreSee Less

Zoom is the leader in modern enterprise video communications, with an easy, reliable cloud platform for video and audio conferencing, chat, and webinars across mobile, desktop, and room systems. Zoom ...
View on Facebook
· Share

Thought we could do with a bit of light relief. Have been in lockdown for a while now. ... See MoreSee Less

When this happens, it's usually because the owner only shared it with a small group of people or changed who can see it, or it's been deleted.
View on Facebook
· Share

Postponement of AGM - originally planned for 19 August.After much soul-searching, we regret to advise that a decision has been made by the FHS committee to postpone the AGM and guest speaker. We will keep you posted on an alternative time.Thanks for your understanding. ... See MoreSee Less
View on Facebook
· Share